Visit my RedBubble page to see my photographic work
(and purchase it, if you wish).

I started taking pictures back in fifth grade using a little Kodak Brownie. I still have the little wood-bound photo album of carefully mounted and labeled black-and-white photos.

When I look at these pictures now, I am first amused and then smitten by memory. So strange that one can travel in time so easily.

Ages later, in the late 1980s, using an old Nikon I bought from a friend, I took a darkroom course. (You know, where you actually develop film in baths of chemicals and mess with physical burning and dodging?)

Here is my best image from that era, one of a gorgeous, mysterious stranger (still my hubby years later). 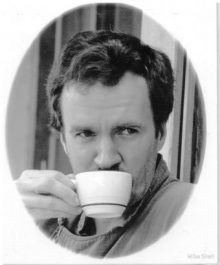 Most of what is on my RedBubble page was taken with a Canon PowerShot…which, unfortunately, I dropped a few summers back.  Still waiting to replace it with an upgrade.

When I cite books or websites, I link to them. When I use images, I add a pop-up title which gives attribution. Also, the image itself usually links to the source website.