“YHWH is the bearer of consequence, not punishment or rewards.” 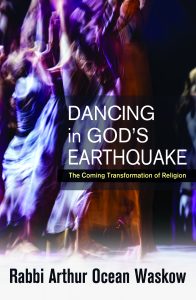 Finally, I have a term to use in place of the word “God,” which creates so much doubt and misdirection for so many people, both religious and secular.

Rabbi Waskow1 opens his book with “A Note to the Reader – Coronavirus: The Eleventh Plague.”  His manuscript was submitted to Orbis Books in November 2019, a month before the first reports of a new virus in Wuhan, China.

He explains that, though coronavirus is not mentioned in this book, he calls this eleventh plague an earthquake “among all the earthquakes in our lives—the life of all Humanity.”

Reb Walter uses this Note to demonstrate a key principle of reading scripture: the necessity of “reading the context.”

The ancient rabbis taught that Torah was written not in black ink on white parchment but in black fire on white fire—we must read the fiery “blank” spaces by interpretation of the whole intent….

I invite you to read not only this [book] but whatever sparks of meaning rise for you from all the other white spaces that await you. (ix)

Next, Reb Walter puts the CIVID-19 crisis into the context of the Ten Plagues in Exodus, frowning on the traditional reading of this story as being about the victory of a Super-Pharoah (God) over the human Pharoah.

This understanding that the Exodus is a contest between a king and a Super-King is underlined by the false biblical translation of YHWH as “LORD.”  (The rabbinic tradition substituted “Adonai/Lord for “YHWH” but the Hebrew Bible does not.)

It is more likely that YHWH with no vowels is simply a breath—Yyyyhhhhwwwwhhhh: The Breath of Life, sometimes the Wind of change, sometimes the Hurricane of destruction.

This Ruach (Hebrew for “breath, wind, spirit”) is what intertwines all of life.  We know now this is literally, physically, scientifically true: the Oxygen-CO2 interbreathing between animals and vegetation keeps all life alive.  So YHWH is the bearer of consequence, not punishment or rewards.

Try reading the whole Plague narrative substituting “Interbreath of life” instead of “LORD.”  For me and others who have tried this it changes the whole story. (x)

Reb Walter’s teaching on Yyyyhhhhwwwwhhhh predates this book.  The idea is developed more fully in “Do We Need to ReName God?,” his recent article for The Shalom Center,2 (12/23/2021).

With a sacred but outdated Name, an outdated way of understanding our world, we will, like Moses, fail at the task before us.

For years, I have encouraged prayer communities to breathe the Name as YyyyHhhhWwwwHhhh and then to use “Yahhh” instead of “Adonai.”   And then I have said that anyone who feels deeply God-connected through the use of the “Adonai” which they have recited, chanted, sung a thousand times should – for God’s sake! – keep on using what connects them.

But I have come to think this is an inadequate teaching.  I am now intending to say all this, and then to add my understanding of why Moses failed at first. And why the Voice had to insist on the new Name. And I will invite people to keep that challenge in mind as they voice their own response to the Voice.

Interbreathing, not OverLordship, is how our world now works. Now Is. And will be.

The more familiar version of the Tetragrammaton in square Hebrew (3rd century BCE to present) scripts is shown here (also by Manuela Ideacrea, created in Inkscape, with the same CC BY 2.0 attribution)