Segregation is de jure, not de facto: Richard Rothstein’s The Color of Law

Sasha Bley-Vroman reviews Richard Rothstein’s 2017 The Color of Law: A Forgotten History of How Our Government Segregated America in the October 2021 issue of Western Friend.

Beginning with the statement, “The GI Bill was a White guy thing,” Bley-Vroman tells us: 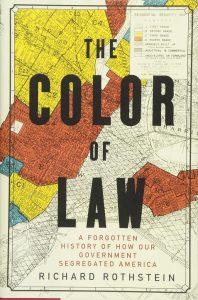 Rothstein demonstrates that we do not have de facto segregation in this country, arising from preference, chance, or custom; we have de jure segregation, brought about intentionally by law. What a horrible discovery. And this in spite of legal decisions that housing discrimination is a “badge or incident of slavery” and thus outlawed by the Thirteenth Amendment.

Keep in mind that the appreciation of property is one of the main ways Americans gain wealth  – but only those who can acquire property to begin with. Thus, the FHA ensured that new housing was segregated. [emphasis added]

The other part of the story is what was done deliberately to destroy older mixed-race urban neighborhoods.

As for existing housing, many older neighborhoods had been integrated since emancipation; but after World War II, zoning was used to change that. African-American neighborhoods were zoned “industrial,” making them less attractive, more hazardous to health, and lowering the value of the housing there.

Eisenhower’s highways were built right through these integrated neighborhoods, and new public transportation served the suburbs, not the inner cities.

Both the increasing wealth gap and FHA rules kept African-Americans from moving to the suburbs, so urban neighborhoods were poorer and also more crowded.

Zoning segregated the schools, and the schools segregated the housing. It is shocking how many cities destroyed their mixed-race neighborhoods by the intentional placement of new schools for one race or the other, driving the target populations to move to the zones planned for them.

As with so much else of our hidden racist history, the stories Rothstein unearths need to be told.

4 comments On Segregation is de jure, not de facto: Richard Rothstein’s The Color of Law