It astonishes me sometimes—no, often—how every person I get to know—
everyone, regardless of everything, by which I mean everything—
lives with some profound  personal sorrow. – Ross Gay1

I am not convinced that our nation’s racial abuses and obsessions can be changed solely by large scale movements and political reforms, or by publicly challenging denial about America’s culture of White supremacy.2

Yes, such examinations of deep-rooted, implicit White supremacy are essential for compelling attention to the cause.  And political reforms are essential for giving legal leverage to those seeking to empower change.

But real change happens person by person, not at policy level.  One might as well try changing the nation’s language by fiat.

What are the intimate fears each person carries, the fears they project onto others through stereotypical prejudices and defensiveness?  We cannot heal without naming our fears.

Recently, my husband and I attended the monthly dinner of LGBT Asylum Task Force, a ministry of Hadwen Park Congregational Church, UCC in Worcester, MA.

Ostensibly, we were there at the urging of local Quakers who know of our 36-year marriage and hope we will become part of the Task Force. Personally, I was there out of my habitual preacher’s kid reflex that by “doing good” I might earn approval and acceptance from those I long to belong to.

The majority of the Task Force’s current LGBTQIA+ asylum seekers are from Africa and the Caribbean, fleeing persecution, prison, torture, and death in their home countries.  They are mostly young adults who have survived daunting journeys of escape and stateless vulnerability, now caught in America’s suspicious, often hostile labyrinth of tests of their so-called “worthiness” to stay and make a life in this alien land.

As the Task Force flyer3 explains, “Asylum seekers are prohibited from working for at least 180 days after submitting a petition for asylum. As a result, many are forced into homelessness and resorting to stigmatized means of survival” [emphasis added].  The Task Force provides housing, food, and a small monthly stipend, and it arranges access to pro bono legal services. Asylum seekers who have an attorney stand a much greater chance of success.

More importantly, these refugees are provided a community, first of all with each other and then, as well, with a faith-inspired group of Americans who actively welcome, befriend, and encourage them.

So, what was my hidden fear that night, the fear that shut me down emotionally and kept me on guard against these strangers whom I was supposed to want to help?

Shortly before my fourth birthday in 1954, I suffered through and survived a case of non-paralytic polio.4  I have only fragmentary, iconic memories of this experience.  That is not unusual, since children’s brains rarely develop the capacity for full-fledged memories before age four.  But, of course, the brain also suppresses traumatic memories out of self-protection.

The next year my father moved the family from Mansfield, Ohio, the only home I knew, to establish a campus ministry at Ohio University in Athens.  The move was disorienting, as it would be for any family—yet it was not until my 50s and 60s that I began to understand how profoundly the social consequences of that move, almost directly following the polio, distorted my perception of myself in relationship to others.

The archetypal memory from 1955 is of an incident5 in five-year-old kindergarten, my first exposure to kids I didn’t know in a context outside of family in church.  At morning snack I spilled tomato juice on my favorite plaid shirt and cried.  The other kids laughed.

That’s a totally normal kid reaction.  In my former home with kids I knew, I would probably have laughed too.  But here I was a stranger—not only to this town, to school, and to these kids, but to the whole human race.  I had barely escaped from alien abduction by the polio virus, and I was struggling along without any of the energy or coordination or joy of my previous childhood. 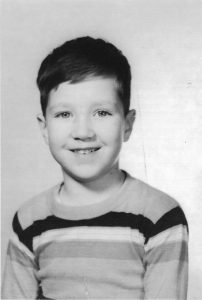 The rest is a long story I needn’t detail here.  From first grade on I was teased on the playing field by both peers and coaches due to my total lack of athletic ability.

They had no awareness of how much polio had handicapped me, because the handicaps weren’t visible to others.  All they knew was that I was a sissy, not a “real boy.”

In 1950s, Lutheran Ohio, no one ever mentioned homosexuality.  In any case, in that era six-year-old boys didn’t yet know about sex.  “Sissy” merely meant to my peers that I didn’t behave the way “real boys” are supposed to behave.

The irony here is that I knew—without letting myself know—that I also was drawn to affection and physical contact with boys in a way that wasn’t “normal.”  I kept this visceral reality secret even from myself until my early twenties.

So here is the perverse irony.

At the Asylum Task Force dinner, I relapsed into my childhood fear of not being accepted by strangers.  Especially strangers of a different age or race or culture.  In Part 2, I told about my discomfort as a White boy at my Black high school friend’s birthday party.  Here it was again.

These are foreign LGBTQIA+ asylum seekers, fleeing homophobic persecution worse than anything I have ever faced.  And they are Black (or “People of Color,” our era’s reclaiming of the racist epithet “Colored People”).  I genuinely wanted to connect with them in a friendly way.  Yet my gut-level childhood fear got in the way and stayed there.  The best I could do was to observe that fear in all its particulars and to stop myself from hiding or fleeing.

This profound rehearsal of childhood fear uprooted me from my “good White guy” habits.  It made me face myself in painful ways.  It made me feel in my own gut the fear admixed with longing for acceptance that I imagine these refugees feel.

And I wonder: how much of people’s visceral reaction both against People of Color and against allegations of White supremacy is fueled by each person’s private gut-deep iconic childhood fears?

We need to uncover these wounds an deal with them, before we can really heal our vast societal wounds.