Finding her courage, she dropped out, moved back to her beloved college town of Ithaca, found some liberal friends—and joined the then fledgling and little-known Paraskavedekatriaphile Rights Movement (aka PRIM). 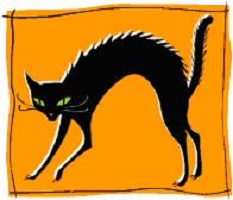 Even as a child, Walhydra remembers, she had felt an odd, sensual thrill whenever a black cat crossed her path, as if something special and delightful (yet somehow perverse) were about to happen.

She couldn’t understand why the other kids on the playground backed away, making strange warding signs, or why they whispered about her rudely if she stood smiling and nodding silently to the little creature.

By her teenage years, she was hanging out with a small circle of nerdy high school friends, spending lunch hours with them at the public library on the corner doing double-crostics in the Saturday Review of Literature, and grinning archly to each other as they roamed the hallways,

College years almost brought Walhydra to the crisis which finally broke in seminary. Intellectually, she was in hog heaven. (Hogs are among the most intelligent of animals—despite their bad rep.) Linguistics, anthropology, computer science, Telugu and Sanskrit, psychology, German literature…it was wonderful.

When she discovered LOTR during her sophomore year, she knew she had found the sacred text.

But underneath all of this, lurking in her shadowy Virgo heart, the fact that she had been born under a Full Moon was insinuating itself slowly throughout her emotional and psychic life.

In the middle of her junior year she “clutched” (as the architecture and EE students in her dorm used to call it). She couldn’t study for exams. She couldn’t finish term papers. She took three in-completes…which she finished in an embarrassingly inept manner the next term. She coasted, directionless, through her senior year.

Now she knows that she was going through what used to be called a “nervous breakdown” over her closetedness. But then, watching her imagined career as a “beloved professor of linguistics at an Ivy League college” vanish like moon shadows, she hadn’t a clue.

She fell in love with a pixyish boy tenor, also deep in the closet, who shared her dark Lutheran delight in mystery. When he said he was going to seminary, she decided to go, too. He backed out at the last moment. She went on with it, having convinced herself that she was committed to the spiritual life.

(Which was actually true, of course, though in ways far weirder and more rewarding than she then imagined.)

As with her undergraduate years, she at first found genuine challenge and uplift in the mix of theological and biblical studies, worship with a band of equally committed brothers and sisters…and frequent Lutheran beer hall debates into the wee, staggering hours of the night.

Still, the closet door was bulging ominously, mainly due to a roommate who (she now knows, thirty-some years later) was crowded in there with her. She had to come out.

She decided to give a miss to the Gestalt therapy part about talking to empty chairs, recommended by her faculty adviser. Instead, she swept back precipitously into Ithaca, as described above.

And, to the eventual joy and cheers of her newly found straight friends and housemates (who met her at the doorway of her first PRIM-sponsored dance, to which they had convinced her to go), she was finally able to raise her head and shout to the world…. 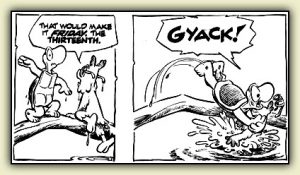 “I LOVE Friday the Thirteenth!”

Image: “Churchy LaFemme’s Friday the 13th,” from BatesLine: Tulsa Straight Ahead, the blog of Michael Bates. “It was a running gag in Walt Kelly’s comic strip Pogo. Friday the 13th was a baleful day, particularly when it fell on a Friday.”