Introduction: In Part 1, I wrote about growing up oblivious to the “white cultural mindset which is my default setting.”  There is much more to this than most of us realize.

The preferred staple in the Ethiopian and Eritrean diet is engera…, a flat sour-like fermented pancake that is used with “wot”, a stew made with spices, meats and pulses, such as lentils, beans and split peas. In Ethiopia and Eritrea, teff is the most common cereal crop used to make engera.

So, what does this have to do with Whiteness?

I learned about teff years ago as one of the “wonder foods” touted by both natural food advocates and the consumer market that preys on them.  The health benefits of teff is clear.  But I also know that Ethiopia and Eritrea, where teff is a critical staple in the indigenous diet, have been swept for decades by war, drought, and famine2—all horrors that both former colonial rulers and competing regional powers have failed to remedy. 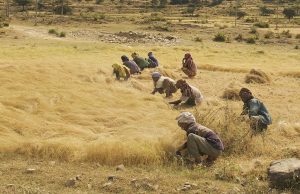 As I sat enjoying my health-conscious middle-class American breakfast, my inward sense of convictedness3 showed me the grotesqueness of this situation.  We can easily buy a 24-ounce bag of teff for seven bucks at the store three blocks away.  But look at the image above.

We do our fair-trade and sustainability duty by getting teff from Bob’s Red Mill, and their website assures us: “Native Idahoan Wayne Carlson began the teff-growing industry in the United States, planting the crop in Idaho near the Snake River Valley…. We source our teff from US farmers.”  So that means we aren’t exploiting Ethiopian and Eritrean farmers, right?

No.  Colonial exploitation in the 20th and 21st centuries no longer depends upon physically occupying and ruling our “colonies.”  It needn’t even depend upon exploiting the raw materials and labor of former colonies.  It can be simply a matter of appropriating indigenous agricultural or cultural resources and reproducing them elsewhere (for example, by paying American instead of Eritrean and Ethiopian farmers to grow teff).

Meanwhile, we leave those peoples to their fate—without the benefits of the global market we have taken from them.

But still, what does this have to do with Whiteness?

“Whiteness” is a class thing, like being part of the nobility or landed gentry in earlier ages.  The parameters of who is “White” have shifted through the centuries, yet the privileges remain the same: access to and protection by the law and by the formal structures of the economic world.  Whiteness is not defined by race or ethnicity but by who is allowed to have the full privileges, not just of citizenship but of access to prosperity. 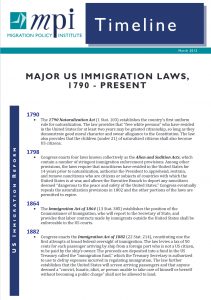 In colonial times, only Northern European men of property were White in this class sense.  Everyone else was either a merchant or tradesman, a hired man, an indentured servant, a slave—or a woman or child.  Granted, all of these except Indians and Blacks were considered “white” by race.  The Nationality Act of 1790 limited citizenship by naturalization to “free white persons.”4

The 1868 introduction of freed slaves into citizenship by the 14th Amendment was a drastic disruption of the balance for the whole United States, not just for the defeated Confederacy.  This is part of why Northerners looked the other way when the South gradually replaced Reconstruction with Jim Crow.  The presence of free Blacks was tolerated in the North, but just barely.

As the parameters of who is White have expanded, Africans, Asians, and Indigenous Americans (including Hispanics, who are sometimes treated as mixed Indian, Spanish, and Black) have been left out the equation.  They may have or gain citizenship, but they do not automatically have the privileges of Whiteness.

What do I mean by automatically?

In retrospect, I know that I felt comfortable being close to Bernard and Randy and other Black friends in high school because they were skilled at fitting themselves into White culture.  One time Bernard invited me home for his birthday party.  My painfully out-of-place feeling arose in part from my habitually painful shyness with groups I don’t know.  But a White boy can’t blend into the background when everyone else is Black.

Throughout my adult life, I have had dear Black friends in many contexts, from social work and librarian professional settings to volunteer work with American Friends Service Committee.  Some of those friendships have been rich in shared trust, humor, vulnerability, and compassion for others.  And yet….

In all of those contexts, my Black friends have been fluent in the ways of White middle-class culture.  When I write of non-Whites gaining the privileges of Whiteness, I mean those who are successful at “being” White.  They do all the work of assimilation, while I am merely my default White self.

Worse, on the street I notice my wariness of—or sometimes even fear of—”white” people who are not White.  In other words, my visceral prejudices have more to do with my social class than they do with so-called racial differences.  I can be color-blind with non-Whites who move comfortably in White society.  But if I sense a class difference, I am automatically on guard.

It has taken decades for me to recognize this reflexive behavior, to sees it for what it is.  I cross the street, I avoid panhandlers, I don’t socialize with Blacks or non-White whites in their own worlds.

This may not be the same inner dynamic that other White folks experience.  For me, though, the finger of judgment is pointed uncomfortably and necessarily back at me.  For me, the predominant prejudice is classism rather than racism.

Knowing this does not free me.  Perhaps acknowledging it publicly will help.

Image: “The Teff Harvest, Northern Ethiopia,” by A. Davey from Where I Live Now: Pacific Northwest [Attribution 2.0 Generic (CC BY 2.0), via Wikimedia Commons]. Men and women harvest the Ethiopian staple grain teff in a roadside field between Axum and Adwa in Northern Ethiopia.

Image: “CLASSISM/RACISM,” from “How classism and racism effects Human Experimentation,” on Youth Voices – Conversations about your Passions (3/19/2018).

EthnoMed is Harborview Medical Center’s ethnic medicine website containing medical and cultural information about immigrant and refugee groups. Information is specific to groups in the Seattle area, but much of the cultural and health information is of interest and applicable in other geographic areas….

The objective of the website is to make information about culture, language, health, illness and community resources directly accessible to health care providers who see patients from different ethnic groups. EthnoMed was designed to be used in clinics by care providers in the few minutes before seeing a patient in clinic.

For instance, before seeing a Cambodian patient with asthma, a provider might access the website to learn how the concept of asthma is translated and about common cultural and interpretive issues in the Cambodian community that might complicate asthma management. A practitioner could also download a patient education pamphlet in Khmer (Cambodian language) to give to the patient.

EthnoMed is intended to be a community voice in the clinic, so user feedback is essential.  Ethnic organizations are urged to tell us about ongoing activities and resources in order that they may be added to our local resource information. As providers learn from their patients about traditional treatments, cultural perspectives or resources, we urge them to share this information with us.

EthnoMed assumes that culture is dynamic; particularly immigrant cultures…. As immigrant groups acculturate and communities react to the change in unique directions regionally, EthnoMed hopes to reflect this pattern of change. We assume that as groups acculturate, traditional concepts will be modified and so we solicit periodic review and feedback from community leaders about changing health concepts in their communities. We welcome comments and suggestions from members of these ethnic groups around the world.

Ethiopia faces one of the most complex human mobility environments in the world, with a range of social, economic, political and climatic factors driving populations within and outside its borders…. The COVID-19 pandemic, the invasion of the desert locust as well as the heavy floods in several parts of the country, all contributed to the increase in the vulnerability of a population already living in precarious conditions. Incidences of political and intercommunal violence flared up in several regions of the country…. In November 2020, tensions between the national and regional governments developed into widespread conflict in the Tigray Region, creating a volatile humanitarian situation as numerous civilians have been displaced….

According to IOM’s Displacement Tracking Matrix (DTM) Report from August 2020, 1.82 million people are internally displaced across 1,298 sites in Ethiopia. The primary drivers of this displacement were conflict – by a large margin – as well as climatic shocks such as drought and floods…. [In addition] the Government of Ethiopia’s (GoE) plan to return or relocate internally displaced persons (IDPs) nationwide, which led hundreds of thousands of IDPs to return to their areas of origin or relocate to land designated by governmental bodies. Ethiopia is also the second largest refugee-hosting country in Africa, hosting mainly refugees from South Sudan, Somalia, Eritrea and Sudan.

The overall aim of Quaker faith and practice is a social one: to nurture ever-expanding kinship and mutual support with all of life.  The personal practice, though, begins and continually returns to self-examination.  That is, to allowing oneself to see and know the obstacles that one puts in one’s own way forward.  Quakers speak of letting the Inward Light expose these self-imposed restrictions, of letting the Light convict us—not of sin, in the conventional Christian sense, but of self-blinding.

8 comments On OMGWM Part 2: “Whiteness” as a class thing