Note: I encourage readers to give full attention to the footnotes.  I have used a reference librarian’s “due diligence” to offer relevant background information throughout this article.

My life began in a liberal 1950s Ohio preacher’s family.  When I was 10, Dad moved us to Boston so he could earn a doctorate in pastoral care and counseling.  In 1965, he moved us to Columbia, SC, where he had a faculty career with Lutheran Theological Southern Seminary. 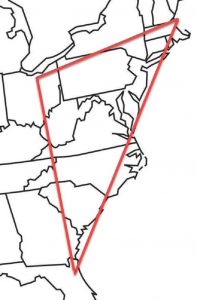 In 1977, after a decade of college and employment in Ithaca, NY, I returned to Columbia.  There I took up again with and eventually married a high school friend, Jim.  It was he who introduced me to the Quaker way.

In 2000, we moved to Jacksonville, FL.  Jim joined the statistics faculty of the University of North Florida, and I joined the reference librarian staff of Jacksonville Public Library.  We are now both retired and have just relocated to Worcester, MA.

I share this migration map as a clue to my naïve progress as one whose life-long racial justice concern has often disguised the white cultural mindset which is my default setting.

My senior year was 1968.  After Martin Luther King’s assassination, my close friend Bernard gathered some of his fellow Black students after school in the nearby public library branch to consider how they could dissuade other Black schoolmates from violence.

The principal wanted to punish Bernard for this, despite having neither legal nor school policy grounds.  I was among a group of White students who challenged him, pointing out the salutary value of this non-violent organizing.

I came south from Boston schools that were already integrated, so I was accustomed to having Black classmates.  However, I remember with dismay one experience which at the time I blithely congratulated myself for.

I was going out for lunch with Randy, another of my Black friends, when a White guy from across the parking lot shouted “N_____-lover!”  Randy started to go after him, but I stopped him, saying I didn’t mind being called that.

I was in my early 60s before I realized that my feelings had not been the real point in that incident.  Randy was experiencing one of the thousand daily insults of being Black in a White world.

Though my parents were deliberate in teaching their three kids to embrace all races and avoid bigotry, I actually knew no Black people in my little grade school world of Athens, Ohio.  On once-a-year visits to Mom’s parents in Charleroi, near Pittsburgh, we played with the neighborhood Black kids without hesitation.

The first Black adult I knew personally was the Nigerian grad student at Ohio University who lived with us for a year.  Again, I didn’t think about his being Black, but I was intrigued by his British English and the curly black hairs he left in the bathroom sink.

Boston is where I began to have Black classmates.  But that is also where, in retrospect, my memory begins to show me my obliviousness to the filter of White culture: I don’t remember those kids except as classmates.  I had White friends but, except for one playmate from India, none of color.

This is where I began to learn the practice of being unbigoted towards Blacks who could assimilate into White culture.

Denying the existence of a “White culture”

Why, when queried, do they insist that they are simply “American” rather than white, when it’s obvious that there are multiple ways—multiple cultures, multiple ethnicities and races, multiple languages, multiple experiences—of being American…?

The assertion of representing “Americanness” is symptomatic of those very cultural habits that render whiteness simultaneously dominant and transparent….

To an anthropologist’s eye, there is clearly a culture shared by white people in the United States, a culture with its own holidays, bodily norms, language styles, foods, attitudes, values, and so on. So why is naming this so perplexing for many whites…?

Put simply, this denial of the existence of culture—which involves erasing, marginalizing, silencing, and degrading nonwhite experiences—is an example of what Buddhist traditions identify as ignorance or delusion (avidya). 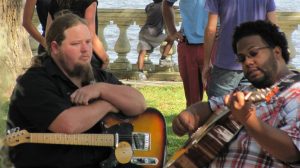 Quli herself follows the contemporary standard of capitalizing “Black” as being the name of a distinctive, self-identified culture yet keeping “white” in lower case.  As the reader can see here, my choice is to capitalize both.

Here from the Associated Press is a discussion of the alternatives.1

After changing its usage rules…to capitalize the word “Black” when used in the context of race and culture, The Associated Press…said it would not do the same for “white.”

The AP said white people in general have much less shared history and culture, and don’t have the experience of being discriminated against because of skin color….

[Yet] in some ways, the decision over “white” has been more ticklish. The National Association of Black Journalists and some Black scholars have said white should be capitalized, too.

“We agree that white people’s skin color plays into systemic inequalities and injustices, and we want our journalism to robustly explore these problems,” John Daniszewski, the AP’s vice president for standards, said in a memo…. “But capitalizing the term white, as is done by white supremacists, risks subtly conveying legitimacy to such beliefs….”

Some proponents believe that keeping white lowercase is actually anti-Black, saying it perpetuates the idea that whites are the default race.

A good reason to capitalize the racial designation “black,” then, is precisely that black, in this sense, is not a natural category but a social one—a collective identity—with a particular history…. What’s more, the very label “black” plays a role in generating that identity.

That’s how social identities work. The specific labels can shift over time (Negro, colored, Afro-American), but they help to bring into existence the group to which they refer….

Social identities aren’t reducible to a label, but labels play a role in generating and sustaining them….

So what about white folks? The style guide of the American Psychological Association declares, as it has for a generation: “Racial and ethnic groups are designated by proper nouns and are capitalized. Therefore, use ‘Black’ and ‘White’ instead of ‘black’ and ‘white.’” That seems sensible enough.

But for some people, White is the sticking point. As The American Heritage…ventured, in its fourth edition: “In all likelihood, uncertainty as to the mode of styling of white has dissuaded many publications from adopting the capitalized form Black….”

[However,] as a generation of work in “whiteness studies”—by scholars such as Nell Painter, David Roediger, and Noel Ignatiev—has emphasized, “white” arises as a racial designation only in contradistinction to other racial designations (the “blackamoor,” the “red man,” and so on). Without the theory and practice of racism, there are neither blacks nor whites.

I will continue this exploration in “OMGWM Part 2.”