Continuing my series on Stringfellow’s An Ethic for Christians and Other Aliens in a Strange Land (1973).

When William Stringfellow uses the biblical language of the Book of Revelation, he is not referring to beings or events of some future supernatural “end time.”  He is using it—as did Revelation’s author and first audience—to refer poetically to things of this present world, this mortal human world.

Chapter 4 is “Stratagems of the demonic powers.”  The demonic denies the reality of whatever is wholly human.  It seeks to subdue the human under the dominion of society’s systems and structures, the so-called “powers and principalities” of Revelation.  These worldly powers1 are not supernatural beings.  They are the real systems and entities in every human society that command obedience.

[All] demonic claims against human life…have a common denominator…. Each and every stratagem…of the principalities seeks the death of the specific faculties of rational and moral comprehension which specially distinguish human beings from all other creatures.

Whatever form or appearance it may take, demonic aggression always aims at the immobilization or surrender or destruction of the mind and at the neutralization or abandonment or demoralization of the conscience. In the Fall, the purpose and effort of every principality is the dehumanization of human life, categorically. (97)

21st century Americans can recognize these stratagems at work in current events.  Recall, though, that Stringfellow was writing in the early 1970s about the chaos of that era.  He applies the warnings and promises of Revelation to every era.  As I wrote in the previous post, “We always live in the end times.”

Worldly powers replace empiricism with propaganda.  In modern America, this process was mastered in the realm of advertising and then “transported into politics and sophisticated for political purposes on a scale and with a persistence that is profoundly ominous for human beings” (98).

A rudimentary claim with which the principalities confront and subvert persons is that truth in the sense of eventful and factual matter does not exist….

The truth is usurped and displaced by a self-serving version of events or facts, with whatever [means] necessary to maintain the image or enhance the survival or multiply the coercive capacities of the principality. (98)

This process takes place not only in official pronouncements, but also in every aspect of our culture.

What is most significant… [is] not the doctoring of the truth per se, but the premise that truth is nonexistent, that truth is a fiction, that there can be no thorough or fair or comprehensive or detached discovery and chronicle of events, and that any handling of facts is ideologically or institutionally or otherwise tainted….2

Official aggressions against the media have been based upon this proposition. They take the position that the public media, by definition, have been engaged in indoctrination of a viewpoint and version which, insofar as it departs from the authorized administration line, must be either supplanted by official propaganda or suppressed….

This presumption of the principalities that truth does not exist or cannot with some human diligence be uncovered and conscientiously communicated outreaches the subversion of the discipline of journalism. It renders education—both teaching and learning—partisan and farcical and, in the end, condemns and banishes all uses of human intelligence. (99-100)

The preemption of truth [is] much facilitated by other language contortions or abuses which the principalities and authorities foster….

The powers enthrall, delude, and enslave human beings by estopping comprehension with “doublespeak,” as Orwell named it. Orwell’s prototype of the phenomenon of doublespeak declares “war is peace.” (100)

Stringfellow uses examples from his own era for which we can easily find parallels in our own.  The cliché of “winding down the war” in Southeast Asia during the escalation of the most destructive use of firepower in the history of warfare.  The claim, when the United Nations Secretary General verified US bombing of dams and dikes in North Vietnam, that “the dikes are not targeted.”  The warning against “violence in the streets” as American racism’s standard slogan for suppressing peaceful black protest.

Sometimes doublespeak is overtalk, in which the media themselves so accentuate volume, speed, and redundancy that communication is incapacitated…. The auditor’s mind is so insulted, inundated, or transfixed by verbal and visual technology that it is crippled or immobilized.

Secrecy and boasts of expertise

Secrecy in politics is dehumanizing per se; political secrecy begets a ruthless paternalism between regime and citizens which disallows human participation in government and renders human beings hapless against manipulation by trick or propaganda or other babel….

Americans are told that secrecy is an indispensable principle of government…. That claim is embellished by pleas of expertise, that is, the assertion by a principality…that certain affairs are too sensitive or too complicated for human beings to know about or act on….

[This] becomes a boast that bureaucratic routine or computer programming or institutional machinations are superhuman…, relegating the person to a role of spectator or acolyte, submissive and subservient to the requirements of the principality.

One common and homely example is known to anyone who has ever tried to register a complaint or otherwise secure his rights in relation to principalities like the telephone company or the power company or a credit card outfit only to find himself in correspondence with a machine, the convenience of which takes priority. (101-02)

Another key stratagem is the abolition of human privacy.  So-called security precautions become a normalized part of everyday life and business, so as to

enlarge greatly the tolerance of citizens toward political surveillance and the loss of privacy. The kind of open society contemplated by the First Amendment seems impossible—and, what is more ominous, seems undesirable—to very many Americans.

So there is little outrage when Senate hearings expose illegal military oversight of civilians or when…unprecedented political espionage…is exposed or when education…is conducted in so many schools in the presence of the police or other “security” forces. (103)

One more stratagem of worldly powers is to act “so as to engender a belief that their conduct is warranted though no empirical justification exists” (103).

Americans have been trained by commercial advertising to accept audacious deceit, gross falsehood, and excessive claims as normal, and to suspend conscious judgment while letting the subversiveness of this such advertising act on their unconscious wishes, fears, and notions.

What may be more significant, such commercial deception has been so common, so widespread, and practiced for such a long time that when the same techniques are politically appropriated human resistance has already been made pliable. (103)

Nazi anti-Semitism, McCarthyism, the unconstitutional assaults on and mass arrests of protesters in every era, the detaining, family separations, and deporting of immigrant refugees by Homeland Security, all of these are acts which the public at large accepts passively, thanks to the relabeling of lies as facts.

Stringfellow writes: “The demonic powers curse human beings who resist them.  I mean the term curse quite literally, as a condemnation to death, as a damnation” (103).

Two of Stringfellow’s examples: American Indians cursed as savages, and Blacks cursed by chattel slavery as less than human.  Some targets of cursing from our own era: Muslims, Asians, and illegal aliens; “vulnerable” Whites and Black Lives Matter activists; advocates for or against abortion, climate change mitigation, masks and vaccinations, and so on.

The critical truth is this: even when prosecutions fail, charges are dropped, and the news cycle moves on, “the curse nonetheless survives” (103).

A more subtle tactic involves the usurpation of human resistance in various ways.  The sorts of mass marches on Washington and elsewhere that disrupted society in the 1960s and 70s are now commodified as news and social media events with short life spans and little impact.  Meanwhile, non-violent acts of conscience such as civil disobedience are treated as if they were violent or even terrorist actions.

Thus the stratagem of the principalities destroys the witness of human resistance by preemption, by fabricating opposition, by a kind of absorption. And, in this manner, the authority of the State to prosecute is transmuted into the power of the State to persecute. (104)

The effect of these stratagems is compounded by their overlapping, simultaneous use, and by “the intense relationships among the principalities by their multiple rivalries and apparent collaborations.”

This is especially true of ploys that have a distracting or diversionary aspect.

More than that, in circumstances where there is little citizen involvement in the realpolitik of a nation, the persecution and punishment of nonconforming persons becomes itself a form of public spectacle.

For the governing authorities, and for citizens who acquiesce to a spectator role…, American political prosecutions…serve the same purpose as the arena events involving lions and Christians in ancient Rome.3

This same distracting factor is prominent, obviously, wherever scapegoats are sacrificed for the survival of principalities, whether the scapegoat be an…or a class of persons. (105-06)

Already 50 years ago, Stringfellow could see that the “relentless and multifarious babel in America” has “wrought a fatigue both visceral and intellectual” in the public.  Exhausted, demoralized, and struggling to survive, Americans have “lost any expectations for society; they have no stamina left for confronting the principalities” (106).  Even today, as masses rise up in alarm, anger, and resentment, their effectiveness is shattered by the yammer of too many conflicting voices.

The demoralization of human beings in this fashion greatly conveniences the totalitarianism of the demonic powers since the need to resort to persecutions or imprisonments is obviated, as the people are already morally captive. (106) 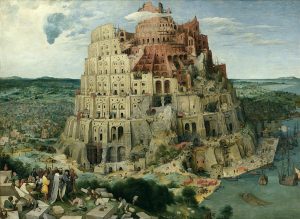 The violence of babel

How does Stringfellow sum this all up?

Babel means the inversion of language, verbal inflation, libel, rumor, euphemism and coded phrases, rhetorical wantonness, redundancy, hyperbole, such profusion in speech and sound that comprehension is impaired, nonsense, sophistry, jargon, noise, incoherence, a chaos of voices and tongues, falsehood, blasphemy. And, in all of this, babel means violence. (106)

What is more, Babylon4 is the city of babel.  The obligatory emperor worship of Rome had such power, as did the Nazi babel against the Jews, and as does racism generally.  Stringfellow believes that, by the 1970s,

babel had become the means of ruling the nation, the principal form of coercion employed by the governing authorities against human beings.

It is not just that babel incites violence…but, more than that, babel is violence. Babel is the violence in which physical and psychical aspects are most intermingled or merged….

Essentially, babel targets the faculties of comprehension—sanity and conscience—which distinguish human beings from other creatures. (107)

Stringfellow concludes his discussion of babel with the warning from Alexander Solzhenitsyn’s 1970 Nobel address:

Let us not forget that violence does not exist by itself and cannot do so; it is necessarily interwoven with lies. Violence finds its only refuge in falsehood, falsehood its only support in violence. Any man who has once acclaimed violence as his method must inexorably choose falsehood as his principle. (107)

Preface: A tract for these times in America

Chapter 1: The relevance of Babylon

Chapter 2: The empirical integrity of the Biblical witness