Just Us: An American Conversation, by Claudia Rankine (2020)
Excerpts from Ismail Muhammad’s  review in The Atlantic

In 2016, African-American poet and scholar Claudia Rankine was not sure that her Yale students “would be able to trace the historical resonances of Donald Trump’s anti-immigrant demagoguery.”  She wanted them to connect the current treatment of Mexicans and other Hispanic people with America’s 19th century treatment of Irish, Italian, and Asian immigrants.

It was a way of exposing whiteness as a racial category whose privileges have emerged over the course of American history through the interaction with, and exclusion of, Black—and brown, and Asian—people, as well as European immigrants who have only recently become “white.” 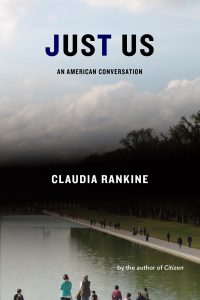 Rankine used a MacArthur genius grant to fund the Racial Imaginary Institute, an “interdisciplinary cultural laboratory” of scholars, artists, and activists.  She also “began exploring the ways in which whiteness conceals itself behind the facade of an unraced universal identity.”  Just Us: An American Conversation extends those investigations.

Rankine’s concern in Just Us is not structural change but the question of interpersonal intimacy, the possibility of interracial understanding.  Avoiding polemics, she “sets out to stage uncomfortable conversations with white people—strangers, friends, family—about how (or whether) they perceive their whiteness.” She wants to see “what new forms of social interaction might arise from such a disruption.”  She interrogates herself as well.

This investigative process is something more nuanced than exposing or chastising whiteness,

using conversation as a way to invite white people to consider how contingent their lives are upon the racial order—every bit as contingent as Black people’s are. “I was always aware that my value in our culture’s eyes is determined by my skin color first and foremost,” she says. The same is true for white people, of course, however unaware of that reality they may be. As she puts it, “To converse is to risk the unraveling of the said and the unsaid.”

For reviewer Muhammad, Just Us is particularly interesting when Rankine includes her own self-examination.  He shares a telling example of how uncomfortable conversations challenge both parties to fuller mutual discovery and disclosure. 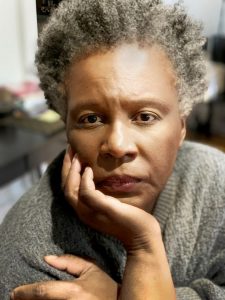 d a good friend, a white woman with whom she talks every few days and who “is interested in thinking about whiteness,” attend a production [of] Jackie Sibblies Drury’s Pulitzer Prize–winning 2018 play, Fairview. It builds to a climax in which white and Black audience members are asked to self-segregate, the white spectators going up onstage while the Black spectators stay put.

Rankine’s friend doesn’t budge. Confounded and furious, Rankine tries to sort out her “own mounting emotion in the face of what I perceive as belligerence.” Is this “a friendship error despite my understanding of how whiteness functions? I thought we shared the same worldview, if not the same privileges. Be still my beating, breaking heart?”

She probes her “unbearable feelings,” spools through her friend’s possible motives, and then shares the dialogue they eventually have, in the course of which her friend explains her unease with situations “manufactured specifically to elicit white shame, penance”: She resists the thrill of “riding the white emotional roller-coaster,” impatient with the notion that being chastised, as Darryl Pinckney once put it, constitutes actual learning—that it accomplishes anything.

Both Rankine and her friend are surprised, by the play and by Rankine’s anger. Their mutual surprise is productive: They emerge unsettled but still talking.

Rankine suspects that the new jargon of racial awareness may become a form of cheap grace, preventing rather than advancing understanding.  Her own white husband fell back on the well-worn keywords when she reported frustrating conversations.  “‘They’re just defensive,’ he said.  ‘White fragility,” he added, with a laugh.”  That is not enough for Rankine, who writes:

This white man who has spent the past twenty-five years in the world alongside me believes he understands and recognizes his own privilege. Certainly he knows the right terminology to use, even when these agreed-upon terms prevent us from stumbling into moments of real recognition.

The personal is an unavoidable part of the path to structural change.  Rankine writes of her own desire to “shout about systemic racism,” but then continues:

But all the structures and all the diversity planning put in place to alter those structures, and all the desires of whites to assimilate blacks in their day-to-day lives, come with the continued outrage at rage. All the perceived outrage at me, the guest who brings all of herself to dinner, all of it—her body, her history, her fears, her furious fears, her expectations—is, in the end, so personal. [emphasis added]

In a time when we can no longer succeed as a nation without correcting systemic racism, Rankine’s “persistent desire for intimacy” may seem to stand in the way.

And yet, Muhammad writes, her “readiness to live in the turmoil and uncertainty of…misunderstanding is what separates her from the ethos of whiteness.” She is not sure that understanding is change, but she mingles doubt and hope in her invitation to us to continue the experiment.

Image: “Claudia Rankine,” by John Lucas, in “Claudia Rankine on Black Lives Matter, Naomi Osaka and justice for all,” Marcus Anthony Hunter’s interview with Rankine for the Los Angeles Times (10/7/2020).

Loneliness means not wanting to be with oneself