It is worth repeating that in William Stringfellow’s language of biblical discernment, “nonempirical” connotes belief systems based on abstract concepts and notions, whereas “empirical” refers to the actual experience of biblical teachings working themselves out in the world.

The Bible is a sacred story collection.  Contrary to our modern Western notions, sacred story is about the real human world.  Not in the sense that it tells us about real historical events, but in the sense that it tells us how to engage ourselves with real historical events as they are happening.  Sacred story is theater as the ancient Greeks understood it: a cathartic, in-the-moment acting out of complex human concerns in a way that bypasses reason and shines light directly upon our inward experience of those concerns.

Stringfellow writes that “The Word is event,” meaning that the biblical Word has the empirical reality of sacred story.  He explicitly rejects biblical literalism and the reading of Revelation as a “predestinarian forecast”:

To view the Babylon material in Revelation as mechanistic prophecy…is an extreme distortion of the prophetic ministry. It is in fact a contradiction of prophetic insight because it refutes the eventful predilection of the biblical Word. A construction of Revelation as foreordination denies in its full implication that either principalities or persons are living beings with identities of their own and with capabilities of decision and movement respected by God. (49)

Any literalistic interpretations of the Bible are a false pretense—a substitute for, rather than a type of exegesis—which violates by their verbatim mechanics the Bible’s generic virtue as a living testament. They devalue the humanity of the reader or listener by assigning the person a narrow and passive role depleted of the dignity of participation in encounter with the biblical Word which the vitality of that Word itself at once invites and teaches. (50)

Stringfellow’s whole approach to Revelation hinges on these insights.  The book is not about a mythical time or a belief system or some ideologically driven, Left Behind-style prediction of the end of the world.  It is a theatrical allegory that acts out the human experience of living under—and transcending—the dominion of any and all human “principalities.” 1

During the reign of the Emperor Domitian (81-96 CE), the ancient city of Babylon, site of the 6th century BCE exile of the Jewish people, was long gone.  The “visible ‘Babylon’ contemporaneous with the Book was not the Babylonia of Mesopotamia but the Roman Empire under Domitian’s reign” (49).

To speak of the relevance of the Babylon passages…as a parable for America in the seventies or for Nazi Germany in the thirties—or, for that matter, for any nation in any decade—recognizes the biblical Word as an event in an esoteric sense. Babylon in Revelation is a disclosure and description of an estate or condition which corresponds to the empirical reality of each and every city— of all societies—in history. The Babylon of Revelation is archetypical of all nations….

The Word in Revelation is an event in an immediate way. But the Word also becomes event more than transiently, for more than the tenure of Domitian’s regime, in that the essential character and authority of the Roman State at that particular time verified the essential character and actual authority upon which any nation, and any regime in any nation, relies at any time in history. (48-49)

The reader is cautioned, though.  Allegory is not just a poetic device; it refers to the real-world conditions it is meant to evoke.

The prophetic words of Revelation which describe Domitian Rome as “Babylon” can also describe the United states of Stringfellow’s 1970s or our 2020s.

The interplay of Jerusalem & Babylon

And what is this description?  Stringfellow warns that any “Any description is inevitably too simplified, any analytical statement is insufficient,” yet he comments on the paradoxical interplay between allegorical Babylon and allegorical Jerusalem.

The elementary truth of Babylon’s apocalyptic situation is Babylon’s radical confusion concerning her own identity and, in turn, her relationship to Jerusalem. The awful ambiguity of Babylon’s fallenness is expressed consummately in Babylon’s delusion that she is, or is becoming, Jerusalem.

This is the same moral confusion which all principalities suffer in one way or another; this is the vocational crisis, really, which every nation in history endures. This is the vanity of every principality—and notably for a nation—that the principality is sovereign in history; which is to say, that it presumes it is the power in relation to which the moral significance of everything and everyone else is determined. (51) 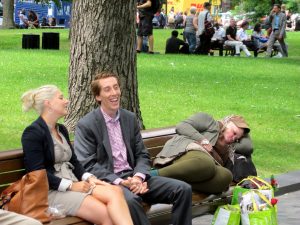 It is not Babylon’s famous wantonness and decadence, Babylon’s materialism or greed or vice or aggrandizement which condemn the city.  It is Babylon’s spiritual pride.

Babylon’s futility is her idolatry—her boast of justifying significance or moral ultimacy in her destiny, her reputation, her capabilities, her authority, her glory as a nation. The moral pretenses of Imperial Rome, the millennial claims of Nazism, the arrogance of Marxist dogma, the anxious insistence that America be “number one” among nations are all versions of Babylon’s idolatry.

All share in this grandiose view of the nation by which the principality assumes the place of God in the world. In the doom of Babylon by the judgment of God this view is confounded and exposed, exhausted and extinguished. A magnificent celebration in heaven extols the triumph of God’s sovereignty over principalities as well as human beings (Rev. 18:20; 19:1-2). (51)

According to Stringfellow, every nation, in its self-idolatry, strives vainly to be or become Jerusalem.  But

Revelation’s injunction to “Come out [of Babylon], my people” asks of us a “peculiar posture2 of simultaneous involvement and dissociation.”  Jesus’ disciples were repeatedly confused by his insistence that God’s kingdom, this allegorical Jerusalem, was not some other, future place and time but, rather, a “peculiar” way of being here and now.

Only when Pentecost happens—where Israel is restored as a visible, viable, historic community and institution as the holy nation—do the disciples and the others called into this new estate of humanity as society begin to comprehend the whereabouts of Jerusalem and Jerusalem’s vocation among the nations (Acts 215-11, 36-47). (52)

How do we lead our lives in the Jerusalem which Stringfellow evokes while still living in the Babylons of the present-day world?

And the life of Jerusalem…is marvelously dynamic. Constantly changing in her appearances and forms, she is incessantly being rendered new, spontaneous, transcendent, paradoxical, improvised, radical, ecumenical, free. (52-53)

The everyday juxtaposition of Jerusalem and Babylon in our lives leads us to reenact every day the collision between two ways of life.  One way pretends to be holy while going about the brutality of worldly political and social business.  The other remains engaged with the worldly, yet it refuses to seek after that which cannot be gained except by brutality.

It is in this theater of biblical possibilities that we are called to choose and act.