William Stringfellow, Part 4: The sanctification of this world

Continuing my series of excerpts from and reflections on Stringfellow’s An Ethic for Christians and Other Aliens in a Strange Land (1973).

Here is where William Stringfellow begins to hold our feet to the fire, we who are often proud “professors” of our religious traditions yet feeble “practitioners.” He challenges us with his special use of the term “empirical” as he applies biblical political ethics to present-day America.

For Stringfellow, “nonempirical” connotes belief systems based on abstract concepts and notions, whereas “empirical” refers to the actual experience of biblical teachings working themselves out in the world. And for him, “incarnation” is not a theological notion. The divine IS incarnated in this world. This world IS, for the creatures living upon it, the body of the divine.

Of course I am cognizant of sentiments, particularly popularized within American Christendom, which dispute the incarnational significance of time and the incarnational integrity of history and thereby forfeit that which is most distinctive about the ethics and politics of the Bible.

I am aware of  the facility with which apparent proof-texts can be excerpted to convenience these sentiments, including some references in the Bible to “heaven” or to “eternal life,” or some eschatological allusions and certain remarks of Jesus….

I eschew the game of proof-texting. The biblical Word is worthy of a better attention than manipulative verbal gamesmanship, however piously motivated. (42)

Stringfellow’s assertion is in keeping with the Quaker understanding of scripture’s role in faith and practice, as described by George Amoss, Jr.,2
in Part 3 of his “The Psychology of Salvation”:

Friends insisted that the scriptures must be read in “the same Spirit by which they were written,” and that when so read would reveal their “spiritual meaning” — pointing not to any thought, belief, or intuition but to the true gospel; not to words about God but to the Word itself, the living spiritual Christ, the inwardly present “power of God.” 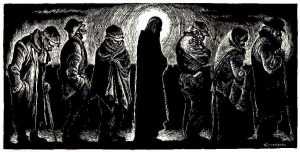 We are physical beings living in a physical world. The Hebrew sacred story of creation is an assertion that this world is good. It is not “fallen.” Rather, human society repeatedly “falls away” from awareness that the world itself is incarnation.

The newer Hebrew sacred story of Jesus as māšīaḥ (Hebrew “anointed one”; Greek christos) is a reassertion of these truths in history. For “Christians and other aliens,” Jesus is a human being who reminds us that we ourselves are to incarnate the divine—call it “God’s will,” “love,” “right relationship with all beings,” what have you—in this world.

“Still,” as Stringfellow writes, “many American churchfolk…repudiate this world as the basic article of their professed Christianity” (42). They cling to a centuries-old false message that God condemns and rejects this world. They follow distorted preaching and teaching

about a fancied “afterlife” instead of this life; about some indefinite “hereafter” instead of the here and now; about immortality (which is actually an elaborate synonym for memory) instead of resurrection ( which means living in emancipation from the power of death); about “heaven”—as if the name designates a destination in outer space—instead of participation in a moral estate or condition; or about “eternal life” as a negation of this life…. (43)

A truer understanding of biblical “good news” is this:

“Heaven”…is that state of self-knowledge and reconciliation and hope—that vocation, really; that blessedness—to which every human being and the whole of creation is called to live here in this world, aspires to live here, and by the virtue of Christ is enabled to enter upon here (Matt. 4:17-25; 5:20; 6:19-21).

Similarly, biblically, “eternal life” means the recognition of time as the redemptive era now, the affirmation of life in time without displacing or distorting the reality of time now, the transcendence of time in the everyday experience of time now (Matt. 27:34-39; Luke 10:25-27; 18:13-22). (43-44)

If this world itself is an incarnation of the divine, then it is sanctified, made sacred, by its very existence. This means that we are all called to live and act here and how for the sake of worthy outcomes here and how.

Raised a non-religious Jew, Eichenberg (1901-1990) fled Nazi Germany in 1933. After exploring Taoism and Zen Buddhism, he became a Quaker in 1940. A friend of Dorothy Day, he contributed much art to The Catholic Worker, as well as to The Nation and to the Pendle Hill Pamphlets.

For more on Eichenberg, see: