Occasionally people wonder where I got the totem name Bright Crow that I use in my email address. Here’s the story I wrote to explain it in the voice of Walhydra’s amanuensis in 2008.

Walhydra likes to tease her amanuensis about a typo he makes occasionally with his totem name, Bright Crow.

Since he’s been typing for forty years, often to earn a living, he just shrugs and laughs. Nonetheless, she thinks the question her title asks is worth exploring.

Now Walhydra herself refuses to explain to anyone what her name means, but it does have a sort of folk etymology.

Back in another century, Walhydra was working as a male secretary for an international construction project in Saudi Arabia. That’s where she met Nikki, Husband #3 (JimJim is #4).

Nikki was a gifted and humorous witchy fellow from the Isle of Wight. For the several years that he and Walhydra worked and traveled together, they constantly shared their fiction writing with each other.

Nikki had a properly British muse, Hortensia, yet he insisted that Walhydra had to have two, to whom he gave suitably Teutonic names: Waltrot and Hydrant. As the writing partnership progressed, it was decided that Waltrot was responsible for all the Sturm und Drang, while Hydrant wrote the comedy and the “gushy bits.”

Fast-forward fourteen years or so to the mid-1990s. Walhydra was now writing as part of several Pagan, Gay, Christian and All-of-the-above chat rooms and discussion boards on the Web, using the screen name of her amanuensis.

At some point, a wise witch invited Walhydra and several dozen others to leave the chat rooms for a private, flame war-free listserv of mostly Pagan, mostly women elders. These are all folk who revere and emulate the Crone aspect of the Goddess. 1

Somehow, when the amanuensis began writing comic, autobiographical stories for this dear online circle of friends, Walhydra sprang full-grown—by a sort of witchy parthenogenesis—from some probably unprintable union of Waltrot and Hydrant.

Around this same time, in the course of changing Internet service providers, the amanuensis was casting about for a new email/screen name.

That was when years of dream journaling, fantasy writing and attending to the confounding yet salutary links between outer and inner world imagery yielded up the Bright Crow totem name.

“Oh, I get it,” says Walhydra, rather smarmily. “A clever, squawking bird who’s good at mimicry and eats carrion or steals hatchlings from their nests for food.”

Always willing to annoy Walhydra for the fun of it, the amanuensis nods. “Yeah, that too.”

He knows that the name actually has much richer though more ambiguous significance than this. Of course, those deeper meanings can only be hinted at through storytelling.

There are early clues in a story fragment he wrote in Arabia, just before his twenty-ninth birthday.

An unnamed figure climbs the stairs of a milky white, marble tower and steps into a burned out chamber, the outer wall of which had been blasted away ages ago by arcane fire.

Crows swoop and laugh as he looks out over endless green lawns and hills to the north, and, to the south, “scorched black ruins, stumps and fire-charred shrubs, and hard, cracked earth.”

Soon there follows this passage:

Yet again the crows laughed.

“Are you dead yet?” they asked—not with sneers, but with something vacant and cold in their voices. Their laughter was vibrant, inhuman, devoid of emotion.

He smiled and raised up a hand, where a small stone lay in the crease of his palm. The sun caught its ruby heart, and it gleamed with a laugh of its own. The crows flew away.

“So,” Walhydra observes. “The good old ‘harbinger of death and destruction’ crow.”

“Well, yes,” the amanuensis replies without apology. “A novice Lutheran shaman might perceive them that way.”

“You know. Europeans spent centuries killing each other off with famine, plague, and war, all the time carrying the Cross before of them as a weapon. As if death were a punishment meted out by the righteous on the unrighteous.”

“…were omens of death as retribution for evil—or as the victory of evil itself.”

“And since everybody dies…?”

The tower and the crows figured again in later story fragments during the early 1980s. After that they faded into a writer’s archive as Walhydra began her fifteen-year career counseling addicts, sex offenders, and mentally ill prison inmates.

In the late 1980s, Walhydra’s step-father of only five years died rapidly from cancer.

This wry, taciturn man had enabled Walhydra’s mother, Senior Witch, to heal herself of decades of hurt. Then, in the space of four months, he went through several rounds of chemotherapy and relapses for metastasized cancer, sought out and made amends with everyone he’d hurt or been hurt by, and died quietly while Senior Witch slept in a chair next to his bed.

Next, Walhydra volunteered as an AIDS buddy for a thirty-year-old named Richie, who told her when they first met, “I’ve already had my argument with God. He’s told me who’s going to meet me on the other side, so I’m ready to go. But…,” he looked around the room, “my friends aren’t ready yet.”

A year later, Richie came home by choice from one too many hospital trips for rehydration and tube-feeding. To everyone’s surprise he was still living after a month, despite receiving nothing except morphine drip for pain.

One morning Richie came out of his drug fog—he’d been claiming he and his friends were all sitting at card tables on the roof playing bridge—and said, “Tell me what’s happening to my body.”

They told him about the scarcely breathing skeleton. 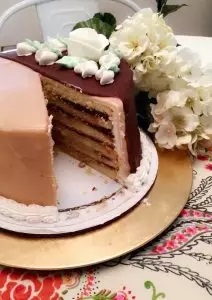 “My birthday is Tuesday. I want a party and a cookout.”

Two dozen people met at Richie’s home the next week—some of them for the first time. Friends from Richie’s old home in New Orleans had FedEx-ed a doberge torte. 2

They brought the cake with candles and balloons into Richie’s bedroom and sang Happy Birthday to the grinning skeleton.

Then he spoke to each one privately. To Walhydra he said, “Your work is done now. Thank you.”

He died two days later, having said nothing more after that night.

Walhydra sits back in her chair, remembering.

“And then there was Alex, who hated my using the term ‘sex offender,’ because he said if it hadn’t been for older men teaching him how to make love as a teenager, he would have lived a miserable life. He got to dance in full regalia with his tribe at one last powwow in North Carolina, before AIDS took him at fifty.”

She shakes her head.

“Then there was Luther, our best friend Randy’s lover. That was the first time I actually saw someone take his last breath…. And I just remembered! My Mom was there with us!”

“But, where are the crows in all of this?” Walhydra asks.

Her amanuensis explains. “Crow is shimmering, iridescent black in this world, because his feathers absorb all light. But on the other side, he gleams as bright as light.”

“Yes,” says Bright Crow. “Death isn’t an evil. It just happens. If anything is evil, it’s the hurt we all do to ourselves and to each other in order to pretend that we are escaping death.”

“That’s why, whenever I hear a crow caw, I turn toward it, touch brow, lips and heart, and say Blessèd Be.”

“Because it is saying to me, ‘Don’t worry. You’re just mortal. You don’t have to figure out how to survive all of this.’

“It’s saying, ‘Just do the best you can for everyone at the moment. Then forgive and ask for forgiveness.”

Image: The Tower (XVI) is the 16th trump or Major Arcana card in most Italian-suited Tarot decks. This version is from the 1909 Rider-Waite-Smith tarot deck.

William Stringfellow, Part 4: The sanctification of this world