Last week I posted excerpts from the preface to William Stringfellow’s 1973 book, An Ethic for Christians and Other Aliens in a Strange Land.  Central to Stringfellow’s argument is his assertion that Americans are “grossly naive or remarkably misinformed” about the biblical concept of “the Fall.”

Christian ideology, in particular Protestant Christian ideology, has dominated the nation’s distorted self-image and consequent hurtful policies and culture from the beginning.  The churches project “too mean, too trivial, too narrow, too gullible a view of the biblical doctrine” of the Fall as being about the evil of individuals.

For Stringfellow, though, “The reality of fallenness [is the] loss of identity and of alienation, of basic disorientation and of death…. [This loss] afflicts the whole of Creation, not human beings alone but also the principalities, the nations included.”

In the Book of Revelation, the metaphor “principalities” refers to all human institutions, systems, ideologies, nations, and other political and social powers. 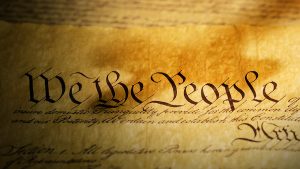 And Stringfellow is blunt in his critique of the principality of America:

The Fall is where the nation is. The Fall is the locus of America…. Since the climax of America’s glorification as a nation—in the ostensible American victory in World War II, most lucidly and aptly symbolized in Hiroshima—Americans have become so beleaguered by anxiety and fatigue, so bemused and intimidated, so beset by a sense of impotence and by intuitions of calamity, that they have, for the most part, become consigned to despair.

The people have been existing under a state of such interminable warfare that it seems normative. There is little resistance to the official Orwellian designation of war as peace, nor does that rhetorical deception come near exhausting the ways in which the people have found the government to be unworthy of credence or trust.

Racial conflict has been suppressed by an elaborate apartheid; products which supposedly mean abundance or convenience turn out to contaminate or jeopardize life; the environment itself is rendered hostile; there is pervasive babel; privacy is a memory because surveillance is ubiquitous; institutional coercion of human beings has proliferated relentlessly.

Whatever must be said of earlier times, in the past quarter century [since World War II] America has become a technological totalitarianism in which hope, in its ordinary human connotations, is being annihilated.

Stringfellow casts aside the popular fantasy on all sides of the political spectrum “that hope for the nation could be restored if only good men would succeed the wicked in high places, particularly in the White House.”

No heroes can substitute for the necessary awakening of the whole nation to its fallenness.

No political movements or policy interventions can substitute for bringing to everyone the sort of cleansing “holy fear” that clears away selfish illusions and opens the way for humble rebirth.

“We the people” text from the Constitution, from “American Freedom was Founded on Knowledge of Man’s Fallenness,” by Eric Metaxas, in The Stream (11/21/2016).

The founders understood that for people to govern themselves, two things that had never before existed must be brought into existence simultaneously. Both spoke to an understanding of mankind that was corroborated by observation and history and that was, in the founders’ estimation, a biblical understanding of things.

The first of the two things was simply the structure of the government. A view of mankind as fallen meant that a government must be created that took this into account and whose very structure limited the power of any one part, lest that power grow and take over, devolving into tyranny….

[Given] the lesson of history that human beings were selfish and desirous of power, why should the founders assume that true self- government could ever work? The answer, as we have said, lies in the second thing. And that thing was, in a word, religion.

“Religion” as the founders understood it was dramatically different from religion as it had been understood in other societies; in fact, we may well prefer the term “free religion” to simple “religion.”

Because in America the idea of religious freedom was paramount. It was always understood that one’s religion was truly free, which is to say not coerced nor mandatory nor affiliated with the power of the state in any way. This was also unprecedented.