The following is excerpted from the preface to An Ethic for Christians and Other Aliens in a Strange Land , by William Stringfellow (1973). 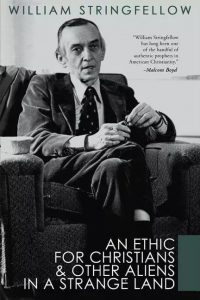 ere has been much too much of the latter in this country’s public life and religious ethos. There still is. I expect such indulgences to multiply, to reach larger absurdities, to become more scandalous, to increase blasphemously as America’s crisis as a nation distends.

“To interpret the Bible for the convenience of America, as apropos as that may seem to be to any Americans, represents a radical violence to both the character and content of the biblical message.

“It fosters a fatal vanity that America is a divinely favored nation and makes of it the credo of a civic religion which is directly threatened by, and, hence, which is anxious and hostile toward the biblical Word.

“It arrogantly misappropriates political images from the Bible and applies them to America, so that America is conceived of as Zion: as the righteous nation, as a people of superior political morality, as a country and society chosen and especially esteemed by God.

“In archetypical form in this century, material abundance, redundant productivity, technological facility, and military predominance are publicly cited to verify the alleged divine preference and prove the supposed national virtue.

“It is just this kind of Sadducean sophistry, distorting the biblical truth for American purposes, which, in truth, occasions the moral turmoil which the nation so manifestly suffers today and which, I believe, renders us a people as unhappy as we are hopeless. It is profane, as well as grandiose, to manipulate the Bible in order to apologize for America.” (13-14)

“William Stringfellow, 1928-1985,” in the Leadership Gallery of “The Church Awakens: African Americans and the Struggle for Justice,” The Archives of the Episcopal Church.

William Stringfellow was a lay theologian and attorney whose long career in social activism began in his junior year at Bates College, when he organized a sit-in at a restaurant which was refusing service to African Americans.

Stringfellow’s theology and his dedication to equality and social justice were inextricably intertwined, and while as a lawyer he devoted himself to representing and defending the vulnerable according to civil laws, his remarkable response to injustice in society was rooted in his Christian convictions….

Socially and politically, Stringfellow often found himself aligned with the “liberal” sectors both of the Church and of society.

In addition to his regular legal practice, he defended the arrested members of the ESCRU “Prayer Pilgrimage” and the first women to be irregularly ordained to the priesthood; he harbored Catholic anti-war activist Daniel Berrigan (wanted by the FBI for burning draft cards); he defended Bishop James Pike against heresy charges; and he was a vocal critic of homophobia.

However, he was not a partisan of internal Church politics. He was adamant that the Church’s role was constantly to defy the status quo, whatever that might be at a given time.

Theologically he often differed with social liberals, and insisted unwaveringly that the Bible, approached honestly and not viewed through the distorting lens of even the most noble social theories, should be the sole arbiter of a Christian conscience….

Stringfellow’s companion of fifteen years, the poet Anthony Towne, with whom he shared a house and a dog, passed away in 1980.

Anthony Dancer’s new book, An Alien in a Strange Land: Theology in the Life of William Stringfellow, will help change that. It takes us from Stringfellow’s working-class upbringing in Massachusetts, to his coming-of-age in the 1950s as a Christian student leader, through his move from Harvard Law School to practicing law among the poor in East Harlem, and ends with the publication of his important 1973 book, An Ethic for Christians and Other Aliens in a Strange Land.

The strength of Stringfellow’s theology lies in his exploration, specifically within the context of the Cold War-era Pax Americana, of the worldly “principalities and powers” described in the New Testament. Stringfellow saw these malign spiritual forces at work in the most familiar of secular and religious institutions—in IBM, in  the popularity of Marilyn Monroe, and even in Billy Graham’s crusades—as well as in all the -isms that seek to shape how we think and act. They’re idols, “impostors of God.”

Stringfellow’s work poses a challenge to the imagination, and manifests a refusal to confuse things as they are with how they could or should be. We confuse a Hallmark card with actual love, and next year’s car model with actual progress. For Stringfellow, the gospel calls us to something better. He gives a wildly creative, occasionally funny, and often disturbing picture of a world upside-down and a gospel right-side-up. His apocalypticism is far more akin to the Book of Revelation’s hope-amid-empire than the Left Behind-style sci-fi prophecies of rapture so popular among Evangelicals today.

“Stringfellow with his long-time partner, the poet Anthony Towne, in 1970,” “William Stringfellow, 1928-1985,” The Archives of the Episcopal Church.

It’s about us, not the police

2 comments On William Stringfellow, Part 1: Against interpreting the Bible for the convenience of America