Our brains are hardwired so that the mere sight of a face [online] in real time minimally satisfies the need for a sense of presence with each other. But, our brains are in bodies in the material world. And our bodies need more than that minimal sight on a screen in order to feel—to know in the blood—that we are really in the midst of other people.

This observation hints at a slowly developing personal insight. 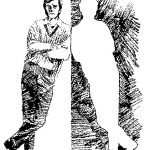 Classical Greeks imagined a separation between mind and body, between spirit and matter. The Jewish missionary Paul1 borrowed this notion—by his time dominant in the Greco-Roman world—as he tried to translate the more holistic Jewish spirituality for non-Jewish worshipers in the first century synagogues and congregations where he taught.

By the time the Roman Empire had competed the First Holocaust,2 what Rome called the “Jewish War” (66-136 CE), Pauline Christians had totally separated themselves from their Jewish spiritual kindred, first out of fear of Rome and, generations later, because they had assimilated Rome’s anti-Jewish propaganda into their own beliefs.

Sadly, the absolute spirit-versus-matter dichotomy of the Greeks has therefore persisted throughout the centuries of Christian dominance and into the empirically-minded science of the modern Western world.

Even so, it is not the real experience of humankind. 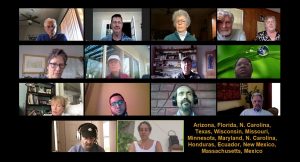 There is tremendous value in being able to bring together scattered or isolated Friends and Seekers in the online realm.  Clearly, during the pandemic we must rely on online worship and communication for now.  Better still, the current crisis is jump-starting a whole new movement by Quakers and others to share sacred space online.

But I don’t believe it is enough of what our bodies and souls need.  I don’t believe that online worship is an adequate replacement for face-to-face communion, Quaker or otherwise.

Human beings are animals with bodies.  Our brains, our consciousness, our sense of self, all these arise from our bodies.  As a student of Antonio Damasio’s work in the neurobiology of consciousness, I understand that even what we call reason cannot operate separate from our bodily emotions (pleasure, pain, fear, anger) and the feelings we have about those emotions (“feelings” are the “meanings” we assign to emotions).

Human beings can not even become human without the bodily interactions we have from birth with other people.  Everything we learn about being human we learn from other people.

Over the decades I’ve learned that my experience of worship is very physical.  Before I can center down sufficiently, I have to walk my awareness through the articulated parts of my physical body, step by step, noticing and relaxing each part.

Doing this is how I “get out of my head.” I move my attention from thinking to being.

More to the point, I know that physically sensing the presence of others makes a difference to me.  Yes, I can remind myself that others are present on in video conferencing by looking at the screen, but I have to open my eyes.

In worship, even in the Lutheran worship services of my youth, sensing the physical presence of those around me grounds my faith, even when my thoughts are distracted or doubt-filled. 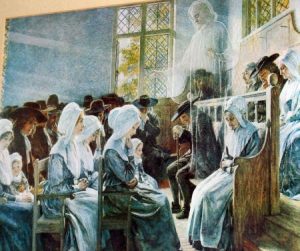 I fear our modern American fetish of computerized living, our utter dependence on automated services and on communication that is at the mercy of social media and profit-driven online information venues.

Look at what has happened to us already because the pandemic has shut down physical world social life in every sphere.  What happens when the internet goes down?

We do what we must do to keep each other safe for now. But how do we develop the inward awareness that allows our bodies to sense each other’s real presence online?

I don’t doubt the power of the spiritual life, so there must be a way.

4 comments On Spiritual life is physical