Louis awoke in his chalet to the sound of tearing winds. The night had been deep and full of tossing dreams beneath the powerful sway of the full and cloudy moon. He lay in fuzzy, semi-sleep. His eyes burned, and he did not wish to rise.

The March wind rushed along the earth and slammed against the chalet walls. There was no shuddering, yet the sound was powerful. He could imagine that the sea below his hill would be quite high and angry yellow-gray, with whipping foam. The image stuck, and, as he pondered it, he felt the mighty breakers slap his chalet wall. 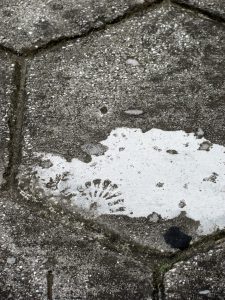 That was the way of wind itself in fact, he thought, as he lay listening. Miles of air which rose and fell from great heights, rushing like the mighty tides beneath them in the sea. He thought of wind as solid waves, driven by the force of gravity, tossed by the turning of the earth. The air thrown into turbulence as the globe spun past beneath it. And the moon. Did she too drive the winds about? Or were they stirred up as the sun moved into Spring? He looked outside.

Louis stumbled back with vertigo. Beyond the screen of light lace curtain he had seen the whole land flowing and reshaping. As the wind raced by the hilltop, it was wearing off the crown. The meadow green, the blaze of jonquils, all the Spring mud, moved in eddies down the hillside. Trees and hedgerows sagged and stretched. They moved like syrup on a cold day. And the road, the rocky cliff face cross the valley– all were moving, bending, sliding, as the wind drove them along.

He looked again and felt his panic rise. The house across the way was slowly yielding to the equinoctial wind. Not breaking up as in a hurricane. Eroding, as the cliffs before the sea would after aeons. As if all the atomic structural links had been relaxed, the world was sliding, being shoved along.

The chalet’s southwest corner seemed to buckle. Without thinking, Louis yelled. He sat against the opposite corner, watching, baffled, as the room took on a curve along that side. The point were walls and ceiling met lost its definition. Nothing broke through. It seemed as if the chalet had become a flexible skin, like yolk sac, and as the wind washed by it pushed and changed the whole form of the space inside. Even so his room was getting smaller as the corners wore away.

Before much longer, he could barely stand. The walls now left were barely six feet high, and all the southwest portion of the chalet had collapsed. In desperation, Louis crawled toward the door. And then he stopped, as an even more frightening realization dawned. If he should step outside, would he too be eroded by the wind? His panic mounted. 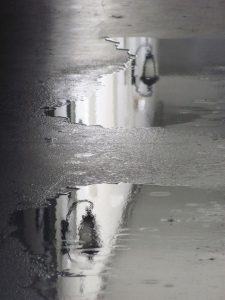 There was a momentary stillness then. He squeezed against the one bit of the window which was left. The world was glowing with a golden inner light. The reshaped hills shown with a rich, warm emerald, and the sea, though now it quite surrounded this one patch of land, seemed clean and full of life. A peacefulness spread through him. As the wind picked up again, he felt a strange, unmoving quietness within. He smiled slowly.

Louis pulled himself along the narrow space between the ceiling and the floor, until at last he reached the door where little save the cat flap still remained. He shoved the door out, and the air was washed and fresh. Despite the howling wind, he felt quite warm. Crawling free of his old home, at last he stood to greet the bright new year.

He spread his arms and exhaled slowly, drifting molecule by molecule into the rushing sky.

This story was originally written for Nikki Dorakis when he and I lived together on the Isle of Wight. Though obviously a Spring story by its date, the memory of it came to me in pre-dawn meditation this morning. It suits new times of change as well as old.