The Book of Joy: Lasting Happiness in a Changing World,
by the Dalai Lama, Desmond Tutu and Douglas Carlton Abrams
(Penguin Random House, 2016)

Without forgiveness, we remain tethered to the person who harmed us. 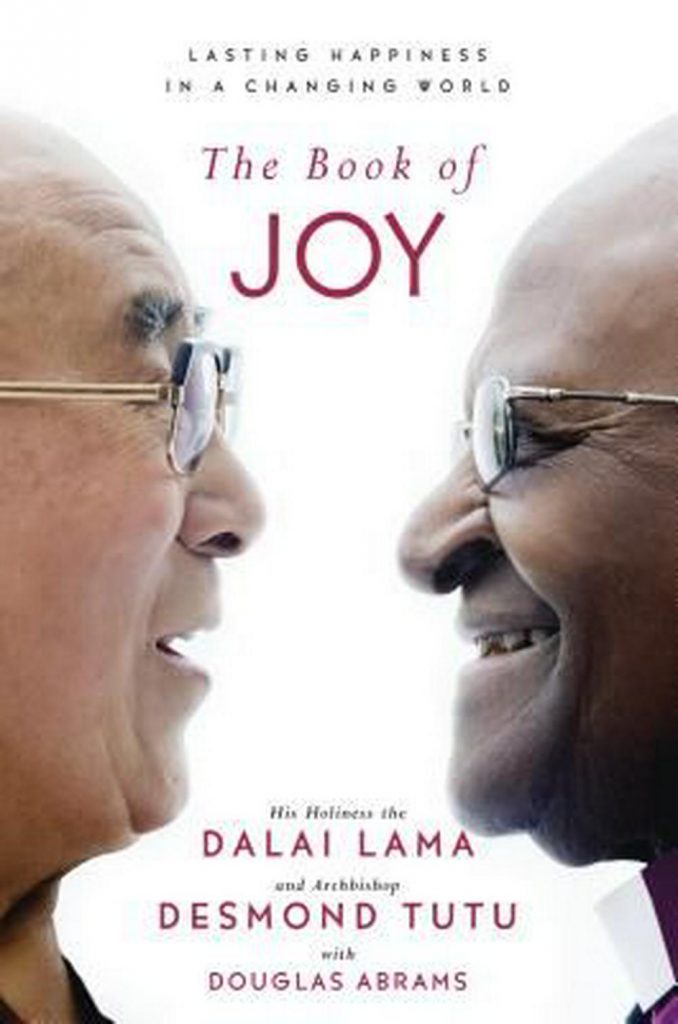 I’ve been gradually reading my way through this a beautiful book, a narrative of the April 2015 meetings between Archbishop Desmond Tutu and the Dalia Lama in Dharamsala, India, on the occasion of the latter’s 80th birthday.

The morning and afternoon pubic meetings each day were structured around a series of questions submitted from a over the world and organized into a developing sequence of topics:

These two humble, comical, compassionate world leaders capture in five days the essence of what I’ve been seeking and practicing for decades: practical integration of the core truths of Christianity and Buddhism.

Here is are some excerpts on forgiveness, narrated by Douglas Abrams (pp. 235-37). 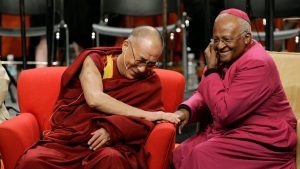 “Forgiveness,” the Archbishop added, “is the only way to heal ourselves and to be free from the past.”

As he and [his daughter] Mpho explained in The Book of Forgiving, “Without forgiveness, we remain tethered to the person who harmed us. We are bound to the chains of bitterness, tied together, trapped.

“Until we can forgive the person who harmed us, that person will hold the keys to our happiness, that person will be our jailor. When we forgive, we take back control of our own fate and our feelings. We become our own liberator.”

“So what do you say to people,” I asked the Dalai Lama, “who say that forgiveness seems like weakness, and revenge seems like strength?”

“There are certain people who act out of the animal mind. When someone hits them, they want to hit back, retaliate.” The Dalai Lama made a fist and pretended to hit himself. “With our human brain, we can think. If I hit back, what use will it be in the short-term or in the long-term?

“We can also realize that obviously nobody was born to be cruel, to harm us, but because of certain circumstances, now he or she dislikes me, so hits me….

Sitting and thinking of the different causes and conditions, then you see that if we are really angry we must be angry toward the causes and conditions— ultimately their anger, their ignorance, their short-sightedness, their narrow-mindedness. So that brings a sense of concern, and we can feel sorry for these people….”

“So it is totally wrong,” he said emphatically, cutting his hand sharply through the air, “to say that practice of tolerance and practice of forgiveness arc signs of weakness….

“Absolutely, yes,” the Archbishop said with a laugh. “I was just going to say that those who say forgiving is a sign of weakness haven’t tried it….”

In The Book of Forgiving, the Archbishop and Mpho outline two cycles: the cycle of revenge and the cycle of forgiveness. When a hurt or harm happens, we can choose to hurt back or to heal.

If we choose to retaliate, or pay back, the cycle of revenge and harm continues endlessly, but if we choose to forgive, we break the cycle and we can heal, renewing or releasing the relationship….

When people remembered their grudges, they had a stress response—their blood pressure and heart rate increased and they began to sweat. They felt sad, angry, intense, and less in control.

When they were asked to empathize with their offenders and to imagine forgiving them, their stress responses returned to normal.

As social animals, it is very stressful for us, and for the whole group, when there is rupture in the relationships that bind us together.

In a review of the research on forgiveness and health, Everett L. Worthington Jr. and Michael Scherer found that unforgiveness seems to compromise the immune system in a number of ways, including disrupting the production of important hormones and the way that our cells fight off infections.

Image: “Dalai Lama & Desmond Tutu Laughing,” photographer unknown. From “The two most joyful people on the planet have written a book and it’s called The Book of Joy,” by Lynsey Chutel on QuartzAfrica (10/20/2016).

Jewish universalism and nationalism
in Vichy and post-war France

1 comments On Desmond Tutu & the Dalai Lama on Forgiveness