For several months I have felt as if I were slipping back into clinical depression again.

The outward signs are here. The fogged thinking, lack of enthusiasm, fussiness, longing to sleep. The undertone of despair. All too generalized to ascribe to any one or cluster of causes.

Yet somehow the subtle bodily symptoms I’ve come to recognize over the decades are not really present. As a scientist in the medieval sense—someone who seeks to know—I’ve looked inwardly for years at the physiological as well as the emotional dynamics of my own depression.

An opening came in 2007, when I recognized for the first time that I  am susceptible to neurobiological depression.  After years of counseling clients who were on anti-depressant drugs, I realized that I needed them myself.1

I call this an opening, because this was when I began to discern—with gradual, contemplative effort—the inward differences between depressive symptoms, triggered by an imbalance of the neurotransmitter chemistry, and depressive feelings, triggered by….

And here is the challenge. 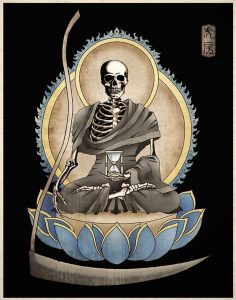 This morning, I resumed my 4 AM practice of core muscle floor exercises, sitting tai chi foundation exercises, and meditation…the latter tested by Shadow2 the cat’s demands for attention.

Afterward, trusting impulse as I’ve learned to do, I lay down on my Indian rug facing west instead of east. Almost immediately, connections were made.

Ah. West. Death. I had forgotten.

Last Samhain I got my last of four tattoos. This one is an 18th century Belgian version of Tarot Trump XVI: La Foudre—The Lightning.3

I took this tattoo to commit myself to learning the emptiness of which Buddhists speak. The awareness that everything I rely upon as a mortal being—including the “I” itself—is conditioned and transient.

And then I forgot.

It’s like the old joke: “Don’t pray for patience. God will give you trials.”

So, at least now I remember what’s going on. Doesn’t change anything about the day-to-day. But it lets my heart become more spacious again.

It was getting pretty crowded in there.

“A man of sorrows and acquainted with grief”

2 comments On I had forgotten