“A man of sorrows and acquainted with grief”

When I was a little Lutheran preacher’s kid in 1950s Ohio, the most familiar images of Jesus were ones with children gathered round and sitting on his knee. These accompanied songs like “Jesus Loves Me.”

I was blessed with caring parents and a child-friendly neighborhood, and my father’s sermons were about Jesus’ compassionate humanity. These childhood portrayals of Jesus did not clash very much with my personal experience of family and community. 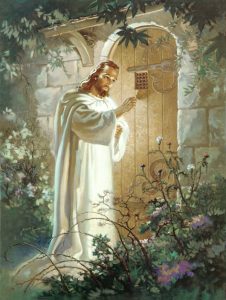 As a preteen and adolescent, I saw classic images like Warner Sallman‘s Western European-looking “Christ at the Heart’s Door.” The painting signified Jesus waiting patiently for one to open one’s heart to him.

Though this early 1940s devotional portrayal was not commonly used in my own home or church, it and Sallman’s “Head of Christ” were very common in the religious literature of the 50s and 60s.

All the while, though, another portrait was speaking to me. Even though I didn’t look at it closely until the early 2000s and didn’t research it’s provenance until this year, this portrait is my adult heart’s image of the Aramaic-speaking, Palestinian Jewish man, Yeshua (Jesus). 1

For as long as I can remember, this framed print hung over the mantle in my maternal grandparents’ home. Grandpa was also a Lutheran pastor, and Grandma was an artist and teacher. I inherited the portrait from them.2 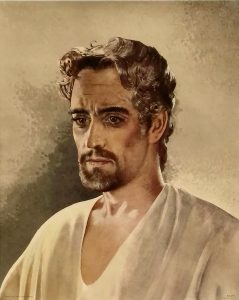 The print was published in 1955 by Christian Education Press. It shows only the artist’s signature, Barosin, with no other information about its source or history.

Artist Jacob Barosin (1906-2001) was born Jacob Judey, the son of Russian Jewish parents in Riga, Latvia.  He grew up in Berlin, studied applied art and art history at the University of Berlin and, in 1930, earned a Ph.D. in art history from the University of Freiburg.  In 1927, he married Sonia Finkel.

In 1933, fearing the rise of the Nazi regime, the couple emigrated to Paris and adopted the surname Barosin.  Germany invaded France in 1940, and the Barosins went through a series of arrests as “hostile aliens,” internments in deportation camps, and escapes. Paris was liberated in August, 1944.  They then immigrated to the United States, where Barosin created art on biblical themes and worked as an illustrator for the NBC television network.3

The most poignant of Barosin’s work resides in the Last Portrait: Painting for Posterity exhibit at Yad Vashem, Jerusalem’s World Holocaust Remembrance Center.  The introductory text4 for the online exhibit tells this story: 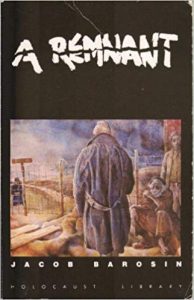 During all of the war years in France, in camps or in hiding, Barosin painted whenever he had the opportunity to do so. In the Gurs Camp, he drew portraits of the prisoners, most of whom remain unidentified.

Using a realistic, detailed style, Barosin immortalized the faces of men who lived in terror of the transports to the East. He documented the exhaustion and despair borne of endless waiting, and gave expression to the fear of the unknown.

Barosin’s original sketchbook of Gurs is permanently with Yad Vashem. His 1988 memoir, A Remnant (pictured above), describes his life in France during the Holocaust.

What does this life history tell me?

The eyes of this Jesus are the eyes of every camp prisoner whose portrait Jacob Barosin drew. This is the Jesus of the Holocaust.

This post’s title is from George Frederick Handel’s air for alto, “He Was Despised,” in Part II of the Messiah Oratorio, taken from Isaiah 53:3 (KJV):

He is despised and rejected of men; a man of sorrows, and acquainted with grief: and we hid as it were our faces from him; he was despised, and we esteemed him not.

Handel wrote in the context of the traditional Christian reading of Isaiah 53 as prophesying Jesus Christ.  However, Hebrews of Isaiah’s time and since then have known Isaiah 53 as the fourth part of the “Songs of the Servant.”

The Servant is a metaphor for the people of Israel themselves, faithful at their best, sometimes over-proud and idolatrous, frequently invaded by their more powerful neighbors, scorned, driven into exile, subjugated when they returned to Palestine.5

Even laying aside the Christological doctrine of the Common Era, one can clearly see both the historical person Yeshua and the Jesus of sacred story as personifying this Servant. In the Hebrew tradition, a mashiach 6 is a human being anointed to serve the people.

Six decades away from my Ohio childhood, I now understand that part of our task as anointed human beings is to sit with the suffering of the world. Not, first of all, to try to solve it, but to sit with it. To allow ourselves to feel sorrow and grief, our own and that of every living thing.

We cannot “save” anyone without sharing their burdens.

Why have you forsaken me?

1 comments On “A man of sorrows and acquainted with grief”