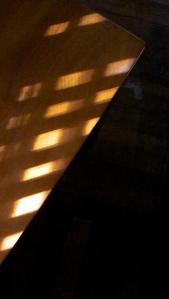 The notion in some traditions that saints are just a few especially pure and devout people is countered in others by the notion that any sinner who makes good faith efforts to live in God’s kingdom can be counted among the saints.

When Paul writes to his distant congregations and addresses those letters to the saints, he is not singling out certain particularly faithful members of the church…[He] writes to everyone in the congregation….

The saints are those who live with aching brokenness, great grief or chronic despair and yet know the saving love of the God met in Jesus.

Three years ago on this blog, I wrestled at length with Jesus’ parable of the weeds in the field (sometimes called “the wheat and the tares”).

At the heart of that struggle was my deep doubt that Jesus himself, Yeshua, would center his teaching parables—as Matthew claims in his interpretation of this one (Matt. 13:36-43)—on the matter of who is or is not included in the kingdom.

At the heart of my faith is a visceral awareness that Yeshua challenges us any time we try to exclude anyone based on our human notions of what G-d wants. To me,

Yeshua’s parable focuses upon how we are not to try to determine which are weeds and which, wheat. How we are to nurture the growth of every plant in the field. How it isn’t our business to pluck out those whom we don’t believe should be in the Kingdom.

Another way of considering this matter arises out of a tradition of Pagan Europe. Here’s an excerpt from an old Walhydra’s Porch post about the “Dumb Supper“:

The final harvest [of the year] came right at the cusp of Winter, around October 31st. But this was also when people believed the veil between the living and the dead was the thinnest, when those whom Death had harvested could return to share a meal with their loved ones.

In Gaelic, the festival was called Samhain, “Summer’s End.” It was Christianized as All Hallows Eve (Hallowe’en), preface to All Saints Day.

Folk gathered for an end-of-season feast to which they believed they could invite the dear departed by setting out extra places of food and wine. The dead could speak through the stories, jokes and laments their survivors told about them. They called it a “Dumb Supper.”

Granted, the dead these folks spoke for were most likely people they knew and cared about. Yet what resonates for me in this practice is the acknowledgment that mortality need not separate us. It is fear of mortality which separates us.

During my counseling career, I sometimes dealt with particularly hurtful behaviors on the part of a clients. I sometimes had to fall back on a counter-intuitive principle of therapy: however hurtful a behavior might be, that person believes there is a good reason for the behavior. The challenge is to help the client discern what that “good reason” is, and then to help him or her find humane means to address the need—or to cope with that need remaining unmet.

It is fear of mortality which separates us.

I believe that, at some level, everything we do which is hurtful to ourselves or others is ultimately motivated by fear of death. Of loss. Of the anticipated pain we imagine death and loss will bring us. Even the person who hurts me or my loved ones most brutally, most sadistically, is at root doing so to “avoid” death.

I’m not excusing anyone by asserting this. What I am doing is challenging myself to let G-d be the judge over if and when and how that person might enter the kingdom.

Meanwhile, I—we, all of us—do our best to sit humbly and tenderly with each other on the friendship bench, waiting for the openings which show us how to forgive and care for each other.

Giving thanks for difficulties